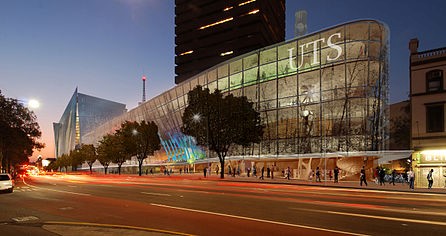 UTS. We’re a young university with a global outlook – and an award-winning approach to learning. We’re driven by innovation, committed to hands-on practice, and known for embedding innovation at the core of what we do. Surrounded by Australia’s creative and digital industries at the heart of downtown Sydney, we’re perfectly placed to build connections that count. Find out what makes us different.

We’re young, but we’re already making our mark: we’re Australia’s number one ranked university under 50 years old, and number eight in the world*. We’ve also joined the world’s elite: according to Times Higher Education (2016), we’re now in the top 200 universities in the world. And this is just the beginning. We’re breaking new ground in teaching excellence and research that shapes the world, we’re respected by our peers, and we’re leading the way when it comes to world-class learning environments. Odds are, whatever degree you choose, you’ll find UTS at the front of the pack.
*QS Top 50 Under 50, 2016/2017 and Times Higher Education 150 Under 50 rankings 2016/2017.

We’ve transformed our campus – and the city around us – with a world-leading redevelopment of UTS. The redefined campus brings together award-winning, technology rich spaces that drive new ways of thinking and learning. Our industry partnerships are front and centre – we’ve developed designated industry spaces that blur the line between university and the world beyond. And our neighbours have joined the reinvention too: we’re right in the middle of Sydney’s creative and digital innovation precinct, which means extensive connections are right on our doorstep.

Partnership between TOBA Center and University of Technology, Sydney.

Partnership was formed between University of Technology, Sydney (UTS) and TOBA. Geoffrey Caban, Dean and Faculty of Design UTS, and Professor Desmond Freman, Head School of Design UTS, visited TOBA and had an informal discussion. Also, they interviewed TOBA students and admitted many students to their school.